Well that is it. Summer is officially over, or more precisely, summer holidays.....it is after all still toasty here in Qatar!

It all started way back in the last week of June, Nadia and the kids jetted off to Florida for a 3 week break. The following week, I joined them after I had finished my offshore trip.

What is it with hire car companies? Or in this instance, Avis. When you have bought and paid fully up front for the full 3 weeks, told them when you arrive etc. and yet this still do not have the car you ordered available and try to give you a car instead of a jumbo SUV as ordered. That is bad logistics planning on their part and need to get their act together! I mean, how would their boss like to book a holiday to a 5-Star all inclusive resort to turn up at the door and be told, "Here is your tent, and a bow and arrow, you have to catch your own dinner, you can go and pitch it yourself in that jungle over there..." Anyway, ended up being upgraded FOC to a slightly smaller, but more luxury SUV, so it was as if it wasn't the end of the world, but certainly not what the wife needed after a 17 hour journey and two flights.......

We rented a villa down in Solterra Resort, which is a relatively new community, and only partially completed. The villa (see this link) was nice big 6 bedroom, private pool so just fine. The resort is adding more villas, expanding the facilities, currently has a clubhouse and community pool, adding in Lazy River etc. We had taken a larger one than we actually needed, as there was a possibility of some other friends coming, but at the time of booking was unconfirmed so just to be on the safe side. Add to this, that we were already really late booking anything, so choices were becoming more limited each day. 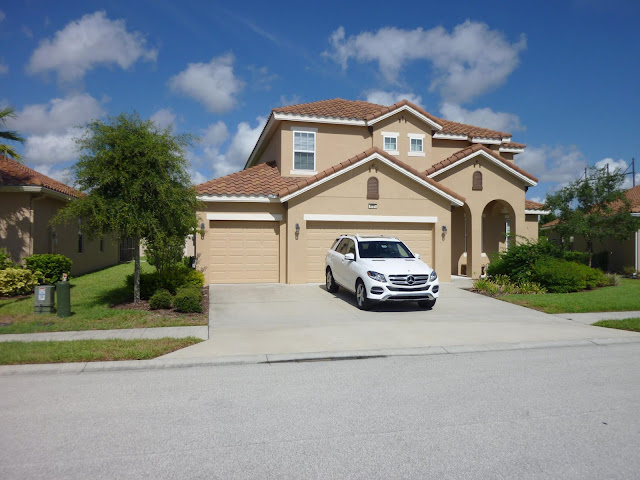 As you can see on the map below, Solterra is just south of the Disney area, off the I-4, which made access to everything quite handy. With nearby supermarkets for everything you would need in the villa, and also not far from places like Celebration, if you didn't fancy a Disney day and could wander around somewhere else for a change. You could also head straight up the I-4 and head right into Orlando for all the shops and eateries on International Drive, or at one of many along the 192. 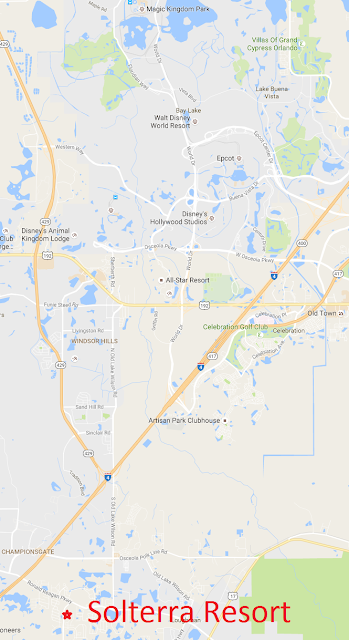 Cool off in the fountain opposite the ice-cream shop (delicious!) in the heart of Celebration! 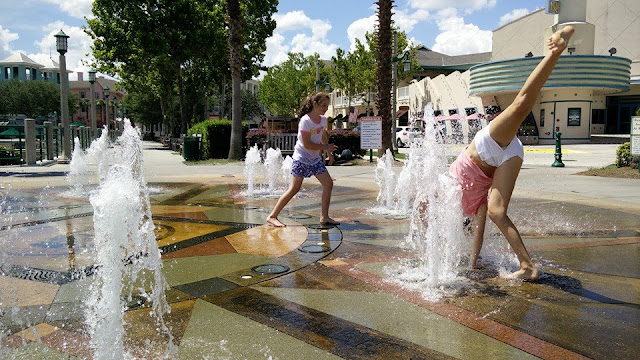 As you can imagine in the theme parks, it was hard to tell who had more fun, the kids or the parents. I think this next picture pretty much speaks for itself, and we were breaking the kids in gently on the coaster at LegoLand. So you can imagine what they were like on the bigger ones that we did manage to get them on! 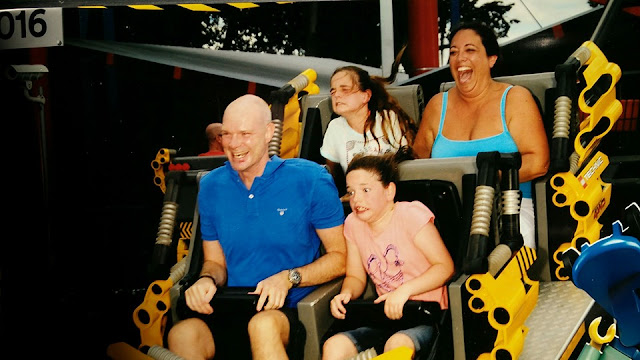 The flights we took were from Doha to Boston, then Boston to Orlando. I'm convinced that clearing immigration in Boston was a lot quicker than going through Orlando, and having read all the concerns in the press about the queues, it didn't appear all that bad. Being a domestic flight from Boston to Orlando also meant that it was just a quick bag pickup at the Orlando end.

After the few weeks in the USA it was time to head back, and after an overnight stay at the villa in Doha, it was over to the UK. I went over for just 1 week, the wife and kids went over until the end of August.

The biggest shock I had, was how much Aberdeen has changed in 1 year since I was last over, probably mostly down to the oil price crash. Thursday is usually the busiest shopping night, and the place was just empty. Even on the Friday when I went out for a few beers around town, the place was pretty quiet. I do hope it recovers soon! The construction work is really coming along with the Bypass, the chaos around the Airport roads, and construction at the Airport. I mean to say, an International Airport with a single temporary baggage carousel outside in a portacabin!

It was great to catch up with everyone who we managed to see, and as usual there is always some that are away or have other things on that you just have to say, well there is always next time! At least I managed to get a decent steak in at the Marcliffe!

I arrived back in Doha for a couple of nights then headed offshore for a 4 weeker. My back to back had asked to do rota shuffle so we both ended up with a 4/4 trip. The trip went surprisingly quickly. I guess keeping myself active with a lot, I mean, a really lot of walking, helped to pass the time.
Came home after the 4 weeks and a it was time to get my survival refresher done again. This time I was doing it in QISC in Doha, makes a change from Aberdeen! The rota swap worked out fine with the Florida holiday, but certainly not looking forward to going back offshore after only 2 weeks at home.

So the family made it back to Doha, and after about a week it was back to school. The eldest has now moved from Gems American to Gems Wellington (British), and at the same school as her sister, which simplifies things slightly. The 2 schools were next door to each other, so no big change really.

Boozy BBQ's, blood, sweat and tear's, DIY repairs, new car.........and all Nadia is happy about is getting Great British Bake Off on the telly thanks to some internet modifications at the villa, but that is a whole different post!