It was time for another visit of the compound maintenance guys.

Problem 1
The light in the kitchen utility room/store was flickering and was needing the tubes changed. I was going to remove the flickering tube as it was really annoying, but it was a bit of a pain to do in the dark, so just left it with the intention of doing it the next day, but then forgot...

Problem 2
I was also out in garden replacing the power socket from a single outlet to a double, and I had turned the power off that feeds it from the small distribution board in the outside storeroom. The board also feeds all the garden lights as well as AC unit for the store room.

When I powered everything back on, I switched the AC back on and it tripped its feed, a 20 Amp breaker. I switched the AC unit to fan only and it ran ok, but as soon as I switched to 'Cool', the breaker tripped. I also tried one of the other AC settings, also left it on just fan for a bit and a variety of other things, and on one occasion it also managed to trip the 40 Amp breaker that is inside the house on the main distribution feeder.

Problem 3
When I moved into the villa, the oven had no trays.

The maintenance guys came over and replaced the flickering tube. The also had some spare trays for the oven.
As for the AC unit, they played around with it and eventually took it down completely and said they will be back the following day. Sure enough, the next day they came back and fitted a brand new unit. Nice cool outside store again. 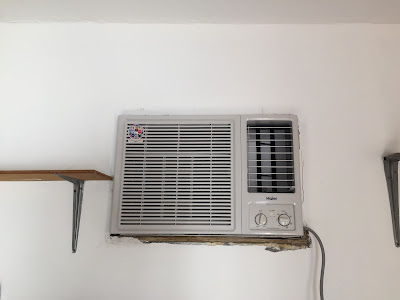