While I was offshore, Nadia informed me that the kitchen waste disposal unit had died. She raised it with the compound maintenance team, but they said they do not do these anymore, but would happily remove it and return the sink to being just a normal drain connection.

I thought that there must be somewhere in Doha that has these, as there are kitchen sale rooms all over the place.

I removed the old unit and checked for size etc, and it looks like a fairly standard arrangement. I was convinced it was exactly the same layout as the one in Aberdeen, so thinking it might be a standard fit.


I checked the manufacturer data on the label and it was rated at 2.25A, 220-240vac, so I would expect the resistance of the motor coil to be around ~100 Ohms, however, when I put my multimeter across it, there was only 30 Ohms. 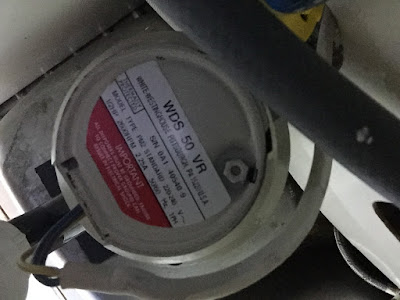 Posting on the Facebook group When, Where and How in Doha, yield no results, so it was a time to just head out in the car.

Dropping the kids off at school in the morning, I was originally going to start off in Barwa Village, as there are literally hundreds of shops and many hardware type places in amongst them, however, Nadia thought I was heading to the massive Ansar Gallery first (Industrial Area Road), so we ended up there. There are a lot of roadworks in the area of the school, and I had asked what she thought was the best way to go, and guess we never got near Barwa Village, and it wasn't until we were at Barwa City, I thought something wasn't quite right! Not to worry.......

Instead we went into Ansar Gallery first, they have a huge kitchen area, but they didn't do disposal units. next followed the road along and stopped at every kitchen/bathroom sale room, and nobody had anything. Next stop was Salwa Road, and again, driving down the service road, stopping at all the kitchen places we could see. Nothing........eventually, a possible glimmer of hope. One of the sales guys in one of the kitchen showrooms, explicitly mentioned a shop by name and where it was. So off we went, unfortunately, when we came onto Salwa Road, we had already passed this shop, and that is why we missed it! We arrived at the shop, Teka, it was closed for lunch, argh!. Couldn't believe it was already 12.30.......we dropped the kids off at school at around 7.30! By this time, we were worn out and hungry, so just headed home to the villa.

I went onto Google and did a search for Teka Doha and found the relevant website. They had an online pdf of their Teka kitchen sink catalogue, and sure enough in the accessories list was a waste disposal unit...Yah!

I went back out when they re-opened (4pm) and into the showroom, and success, they have them, but not in the showroom. The woman didn't have any to show me, but simply showed the catalogue pictures and confirmed the sink hole size requirement. So I purchased one, and it would be available to collect from the showroom the next morning. 1650 QAR, discounted to 1500 QAR, that will do nicely.

Next morning, after dropping the kids off at school, we headed back to the shop, but it wasn't in yet, the woman said around 9.30, so we head home, and then I went back to collect at 11am. Arriving in the shop, the same sales woman, opened the box and let me see everything. It looked fairly standard, came with a whole bunch of fittings etc. so I was fairly convinced there was success in the making.

Getting back to the villa, I opened up everything and laid it all out. This one also came with an air activated switch, which was optional to fit, but thought it would be better than having to turn it on/off at the wall switch all the time like had to with the old one, will need to think about that.

First, up, was removing the old sink connector that the original unit was attached to. The new one was easy to fit, but needed 2 people, as it was difficult to hold in place while trying to clip on a large circlip ring that held the clamping arrangement in place. Once that was done and all tightened up, I removed the spare tap connector hole on the sink, perfect, it is the same size as the air switch button!

Clamping the new disposal unit onto the sink mount, and centralising, it was time to focus on the drains. It looked like everything was just going to slot into place, until I discovered that the fixed pipe that went to the drain system (i.e. the one that is permanent under the sink) was a few millimeters larger diameter than all new new stuff. I took the old trap I had removed and played around with all the bits on the floor to see what i could potentially cobble together, then it dawned on me just to use the old connection directly onto the new disposal unit, after all it 'looks' like they are in the same place. Sure enough, it all just aligned up perfectly, problem solved!

The air hose from the air switch was pushed onto the connector at the bottom of the unit, and the excess hose would round the neck of the unit just in case I needed to trim back in the future.

Next up was the electrics. The old unit had a wire that was terminated directly into the unit. The new one however came with a fixed, sealed flex and a european 2 pin plug. I thought I was going to have to go and get a wall socket and box from the supermarket, but then remembered I had kept the single socket I had removed from outside when I had replaced it with a double. Perfect, mounted it high under the sink, terminated the wire from the wall. Cut off the european plug and fitted a spare UK 13 Amp plug I had in my toolbox.

Second test.....switched on the breaker in the supply cupboard, turned on the wall switch, put on some water and pressed the air switch......yah! It works and how much noticeably quieter is this thing!

As you can see in the picture above, the air hose at the top left, which is connected to the air switch mounted in the sink using one of the spare unused tap holes.
I could have also messed around with the pipework a bit more, and tried to hook in the existing dishwasher drain and fitted a new overflow to the sink, but they are all as original going to a different drain connection so just left them alone for now. Never know, if I come to redo the kitchen, it might get sorted out then........