In Bird Defences - Stage 1 the focus was on the small narrow window frame ledges. Stage 2 is all about the large over hangs above the windows and the roof areas.

For this stage, I went to the next size of Defender spikes and purchased the Defender 8 (Wide), again purchased from Jones and Son from their Ebay page http://stores.ebay.co.uk/defenderbirdspikes/.

Details on the actual product can be found at this link: http://www.birdspikesonline.co.uk/Bird-Spikes/Defender8-Pigeon-Spikes-Plastic

I had measured up that I needed a minimum of about 60m, but with the top ledge being marginal whether 1 or 2 wide would be sufficient, and also might put more on the roof than originally planned, I elected to order up a 100m box. This was being shipped via Aramex Shop&Ship, so did not buy any of their own fixing silicone to keep the shipping weight down, but elected to buy silicone here in Qatar. The 100m box was 15.88Kg and cost 1128 QR to ship.

You might think this is expensive, but if we look at the cost we were quoted locally of 120QR / meter

The spikes are a UV stabilised polycarbonate, temperature rated to 130'c, and carry a 15 year warranty, so if they last half that time in the Qatar Heat/Sun, I will be happy.

The silicone I bought, again was a UV stabilised product, and bought both white and clear, from the the local Carrefour and Lulu supermarkets. For application on the roof tiles I wanted to use clear so it didn't look like blobs of white against the terracotta tiles.

So here is the typical problem, as you can see the pigeons are sat on the ledge round the stairwell tower, below this area is the path at the side of the villa, and it gets absolutely covered. At night, this corner of the roof space is also a favourite roosting spot for the birds. 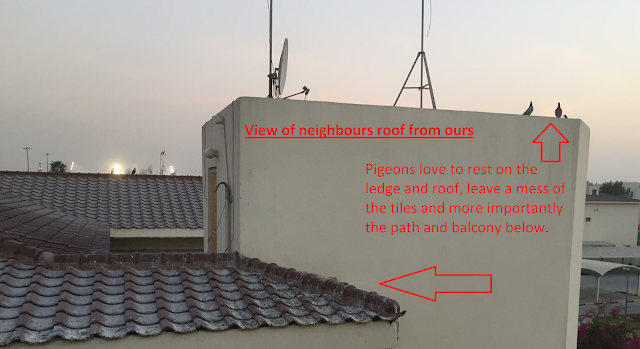 First thing was to get out the power washers and give the everything a clean down the best I could. I also used a scrubbing brush on areas not jet washed, to make sure the surface was relatively clean of 'bits'.
Fortunately the roof tiles were also a shallow angle, so not really a case of sliding off, but to make sure, the roof was dust free and no water around and did it in my bare feet so had could feeling of any movement, also made sure my center of gravity was also going backwards away from the edge and generally kept away from the edge.

For the roof tiles, given the shape of the tile, there was only the two elevated contact points, so with a big dollop of silicone, I pressed in the spike strip, I also overlapped and 'interlocked' the spikes (and silicone between) to give them a bit of extra strength on the roof. Having left them to cure over night, it was clear that they had a really good adhesion to the tiles.

It was the same for the concrete surfaces/painted surfaces, having washed where possible and scrubbed with the brush, putting a think bead of silicone and then bedding in the spikes they took really well to the surface. The spikes also have small cross cut outs and the silicone oozes through this and makes a nice silicone rivet also holding them down. 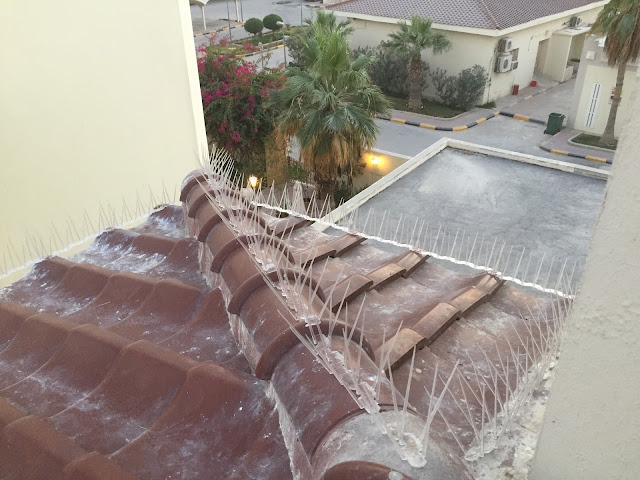 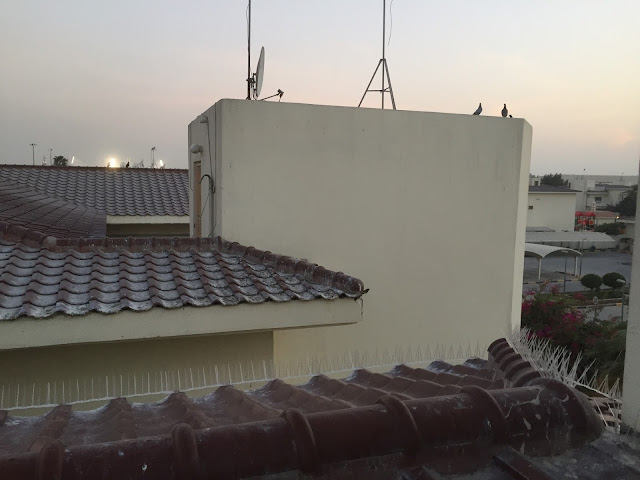 Along the ridge of the balcony, I put a double row as a single row would have left space either both or one side (depending on position), which would have still left room for the birds to land. 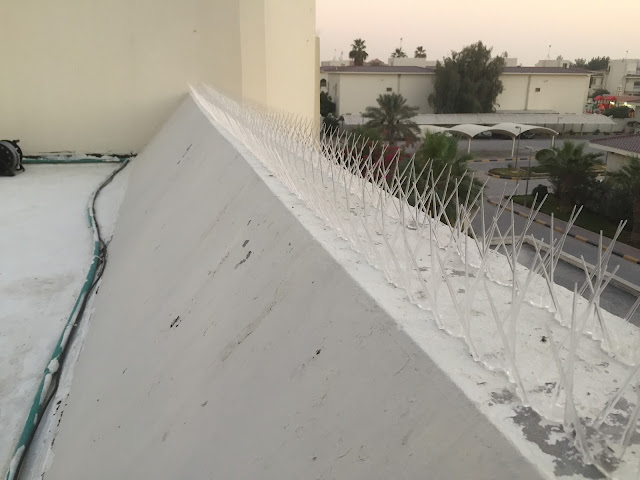 On the stairwell tower, we still need to get access to the roof space for the satellite dish, so on one area where the ladder is normally placed, I several strips of spikes interlocked together to form a removable lift off section, rather than having to try and climb over the spikes. This section then interlocked with the fixed spikes. 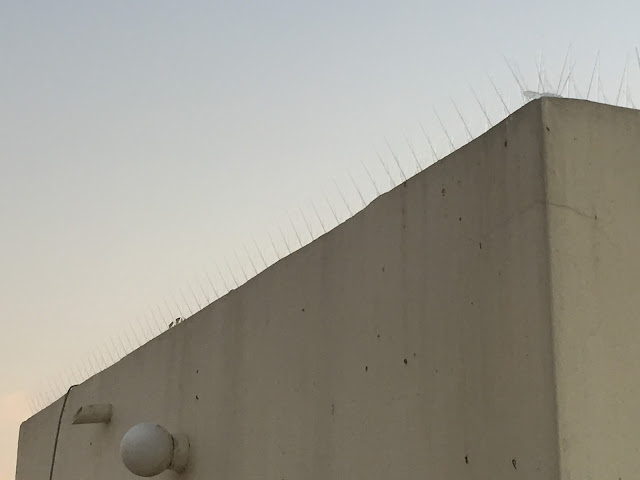 As for the silicone usage, so far I have used about 5 standard tubes, so well under the cost I allowed. A tube will last approximately 10 to 15 meters, with rough uneven surfaces needing a thicker bead.

As for the birds, they are definitely unhappy at not being able to land! Watching them come in for a landing and realize there are spikes, flap and hover for a bit and then disappear. Also even after just a short time, I have noticed how the paths to the side of the house are now staying clean!

The spikes being clear, you do not really see them against the building or against the skyline, especially from ground level, so not an eyesore.