Another one of the delights of Doha, is the taxi's. There have been several occasions where I have booked a car, doesn't matter which company, and jumped in and head off. Quite happily driving along and the driver takes a turn and you immediately begin to wonder a) does he think I am going somewhere different? b) is there more than one place with the same name? c) was I not clear with my instructions? or even all of the above!

Take for example Thursday, Time to head off back offshore. Booked a car the previous night via email to the usual company I use for the heliport run.

Car arrived half an hour early, but was busy putting away stuff etc. So he can wait. Did everything I needed to do, so thought I would just get going, 15 minutes early is no big deal.

Get's in the car, and confirms with the driver heading to the Heliport and explicitly stated Gulf Helicopters heliport just to be sure.

Head off along C'Ring, as I would expect, but he heads across to the filter lane to do a left, but actually u-turns back along C'Ring in the opposite direction. Okay, so he is going the alternate route, no great shakes.

However, when we get to the junction with B'Ring and Salwa Road, he takes a left turn and at this point, I asked, "Which way you going?" and get's the reply 'Corniche'.....at that point the traffic came to a standstill....the comment, "looks like you took the wrong route today" was met with stony silence.

I'm now looking at my watch thinking, how long are we going to get from here to the next turn off.....which he didn't take, but heads deeper into the traffic.

Continuing to trundle along with the flow of traffic, we took a right at the next roundabout heading towards the Corniche, the traffic didn't ease at all. At the next roundabout we went straight on towards the Corniche, the majority of the traffic was turning left towards West Bay, so it started to thin out. The journey along the Corniche was pretty much as normal, and the road met up with the junction were the 'normal' routes would have taken.

You can see the different routes on the map below which I put together using Google MyMaps and see where the traffic was really bad between the two markers. 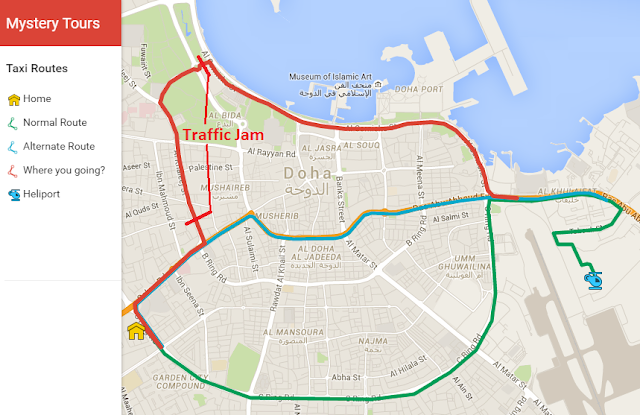 As you can see, the Green and Blue (normal and alternative routes respectively) at least feel like you are heading in the right direction, when you start heading the opposite direction altogether the alarm bells start ringing!

As I said at the start, it isn't first time, and I'm sure it won't be the last.