With the weather reaching the point it is possible to sit outside in the evenings, it was time to have a think about having actually something to sit on!

In the front garden there was a tin roofed wooden framed sun shelter, but it had seen better days and the wood was looking a bit tired. The most annoying bit about the structure however was the posts, they were in places that restricted the use of the space and it would be quite hard to actually get a decent sized table or seating area by working round them.

So that was it, I had decided in my mind to rip it down!


I reached for the step ladder and a hammer and took a look at how the structure was built and just got down to business.

First step was to go up onto the roof and rip out all the roof nails holding down the metal corrugated sheets, then simply pulled all the sheets off the roof. After this alone I was absolutely dripping, it was still in the low 40's and the humidity was up, and really took it's toll.

Under the metal sheets was a green plastic stretchy netting which was absolutely covered in leaves and heavily impregnated with dust, cutting that back made it easier to start ripping out the timbers. After a few thumps with the hammer, the front facing broke free and the inner roof members started to drop down making it easy to simply pull them off. With all the dust combining with the sweat, I was minging, and had a thick layer of paste on my skin, even had to throw my trainers in the washing machine to clean them.

After about 2.5 hours it was starting to get late and no doubt the neighbours would be complaining with me making a racket as they were trying to sleep, so called it quits for the day. 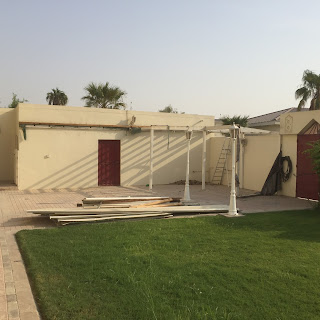 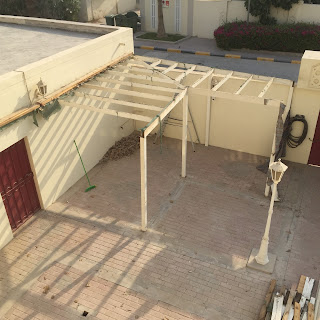 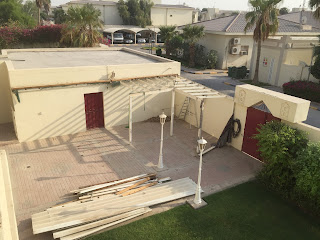 The following day, I had a workshop with work during the day, so had to wait until I got back in the evening and got straight back down to business again.

After another couple of hours the whole thing was down! The area looked so much bigger now. After moving everything out of the garden and across the road to the 'dump' (a magical area in the compound where you just leave things and they disappear usually the next day, no phoning the local council or anything like that to come and remove stuff). 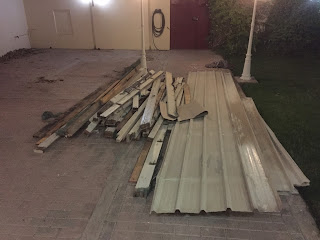 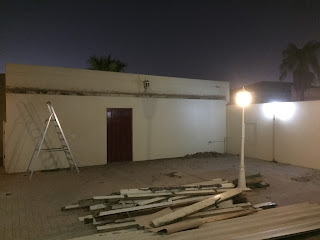