Goodbye Family......See you in Cyprus!

Set my alarm for 3am.......woke up at 2.55am, how is that for timing! That was despite, not been able to get to sleep and then the being woken by noise in the corridor of the hotel (again!).
Got up had a shower, then tried to wake the kids, but nope they were not having it. Took all their bags down to the entrance, got the car and then played Tetris to get them all in. Surprised they fitted.

The roads were very quiet, and dropped them off at Hamad Airport around 4am. Maya was quite hyper, but Sasha on the other hand wasn't. driving back to the hotel, I got 3 messages from Metrash saying that they had left the country, so they were obviously checked in and through immigration.

Got back to the hotel, climbed back into bed and tried to get some sleep, but couldn't nod off, and then of course everyone else in the hotel was getting up, so the noise was back on. Eventually fell asleep and woke up at 8.30 when the alarm went off. I had to head back into town to return the hire car at the Westin hotel. On the way back to the car, I checked out of the 1st hotel room, and also request a late check-out of the 2nd, so I could transfer to the next hotel and not have to wait for a room. Jumped into the car and headed across town, still quiet. arrived at the Westin, handed over the keys and signed the paperwork for the car. Called an Uber, which arrived in about 5 minutes and headed back to the Intercon The Beach.

Climbed back into bed again, then pottered about, watched telly, surfed the net re-backed the suitcases all the usual stuff.

Went down to check out about 13:45 and there was a queue of folk checking in. Eventually got checked out around 14.20. Booked another Uber, and headed across to the Intercon The City.

Arriving at The City, checked in and chilled out for a few hours, could have really slept, but it would have screwed up the nights sleep so just kept the eyes open. Decided to have a shower, and by 6pm I was starving, so just went down for some dinner and then headed back up to the room for an early night. I must say the shower was probably the best shower I have had for years. It was one of those waterfall/rain showers, but this one was more like a downpour, and having just come from luke warm showers at the previous hotel, this one was actually nice and hot.
Up on the 35th floor, view over the city centre, and don't the cars and people look tiny!
So here we are now, sat at the laptop, writing this blog post and ready to sleep. Tomorrows meeting starts at 8am, so, early night, up for breakfast early no doubt.

And that's it, the family are now no longer residents of Qatar, are back in the UK for summer, and about 8 weeks until Cyprus.
Labels: General Relocation Travel 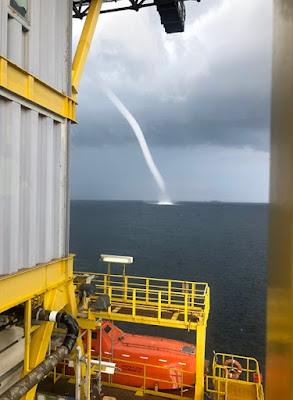